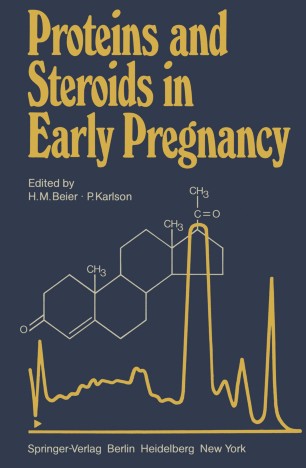 Proteins and Steroids in Early Pregnancy

It is about 15 years since the first presentation on uteroglobin was given to a group of developmental biologists, reproductive physiologists, and geneticists who had gathered in November 1966 at Konstanz (Germany). In the following decade so much knowledge was accumulated that a special symposium seemed appropriate. This was organized as a satellite symposium to the International Congress of Endocrinology at Hamburg and brought together 50 scientists at Aachen. These scientists, working in the field of pro­ teins and steroids, in early pregnancy, recognized the impact of what had been reported, and many of them later agreed to contribute to this booN. and thus to present their research d,!ta available until December 1980. The present volume covers a relatively broad spectrum of data and observations which shed some light on preimplantational embryonic life and on the supports and obstacles provided by the maternal organism with respect to final accomplishment of normal im­ plantation and establishment of pregnancy. The book will serve both as a textbook and as a scientific dictionary for Ph.D. students, postdoctoral fellows and advanced scientists working in this area. The course of early pregnancy depends very much on a proper balance of steroid hor­ mones, and the induction of protein synthesis by steroid hormones is one of the well­ known fundamental processes in cellular differentiation and embryonic development.