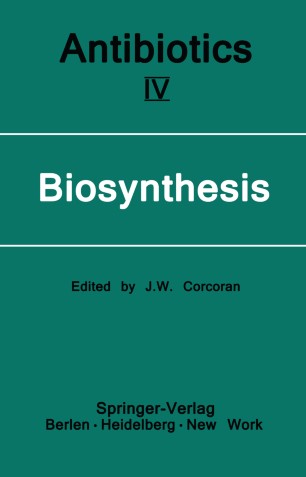 The Series on Antibiotics produced by Springer-Verlag began more than a decade ago with the nearly simultaneous appearance of two volumes, one dealing with the mode of action of antibiotics and the other concerning the biosynthesis of them. The standards set by the original Editors were high, and these books have proved useful to many. The rapid advances in our knowl­ edge of the mode of action of antibiotics and other antitumor agents has stimu­ lated two further works in the same series (Volume III, 1975; and Volumes Vj1 and Vj2, 1979). For some time it had appeared to Dr. Konrad Springer that the time might' be ripe' for bringing the subject of the biosynthesis of antibiotics up-to-date. This Editor agreed to survey the literature and discuss this possibility with his colleagues who are active in research on antibiotics. In spite of the appearance of numerous review articles, both of a highly special­ ized and general nature, on the biosynthesis of antibiotics, it was agreed generally that it would be extremely useful to add a new volume on biosynthesis to the Series. Such a work should focus on collecting a group of contributions dealing with those antibiotics whose biosynthesis is understood in much greater detail now than it was in the middle 1960's. Since Volume II on biosynthesis continues to be available, this addition to the series has not dealt with each and every antibiotic whose biosynthesis was studied long ago.