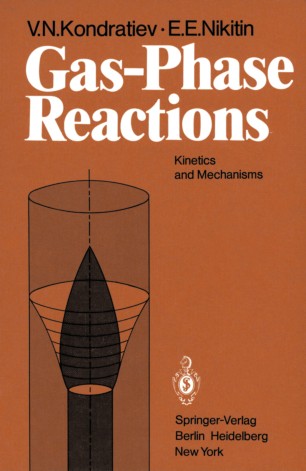 The present monograph appears after the death of Professor V. N. Kondratiev, one of those scientists who have greatly contributed to the foundation of contem­ porary gas kinetics. The most fundamental idea of chemical kinetics, put for­ ward at the beginning of the twentieth century and connected with names such as W. Nernst, M. Bodenstein, N. N. Semenov, and C. N. Hinshelwood, was that the complex chemical reactions are in fact a manifestation of a set of simpler elementary reactions involving but a small number of species. V. N. Kondratiev was one of the first to adopt this idea and to start investigations on the elementary chemical reactions proper. These investigations revealed explicitly that every elementary reaction in turn consisted of many elementary events usually referred to as elementary processes. It took some time to realize that an elementary reaction, represented in a very simple way by a macroscopic kinetic equation, can be described on a microscopic level by a generalized Boltzmann equation. Neverheless, up to the middle of the twentieth century, gas kinetics was mainly concerned with the interpretation of complex chemical reactions via a set of elementary reactions. But later on, the situation changed drastically. First, the conditions for reducing microscopic cquations to macroscopic ones were clearly set up. These are essentially based on the fact that the small perturbations of the Maxwell-Boltzmann distribution are caused by the reaction proper.