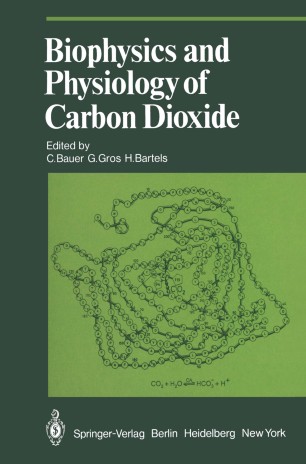 Biophysics and Physiology of Carbon Dioxide

This volume contains the papers presented at the symposium on Biophysics and Physiology of Carbon Dioxide held at Regensburg, April 17-20, 1979. The manuscripts represent the full or even an extended account of the oral presentations. We have decided not to include any part of the discussions which took place after the lectures because this would have led to an undue enlargement of the already substantial volume. The symposium brought together some 60 scientists of various disciplines including biophysicists, chemists, biochemists, physiologists, pharmacologists, as well as clinicians whose research activities are cen­ tered around the various aspects of the reactions and the regulatory role of CO within the body. 2 In view of the fact that numerous textbooks and Proceedings of Symposia deal expertly with the role of CO in acid-base balance, it 2 was decided not to include this aspect in the present symposium. This holds also for the biochemistry of carboxylation and decarboxylation reactions. Particular emphasis was placed on the following subjects: (1) Chemical reactions of CO in water and facilitated diffusion of CO2 , 2 (2) CO adducts to proteins, in particular hemoglobin, and peptide 2 hormones, (3) structure and function of carbonic anhydrase, (4) CO 2 exchange and carbonic anhydrase activity in respiratory and nonrespi­ ratory systems. Each section contains at least one introductory paper that presents the current knowledge in a more general framework.