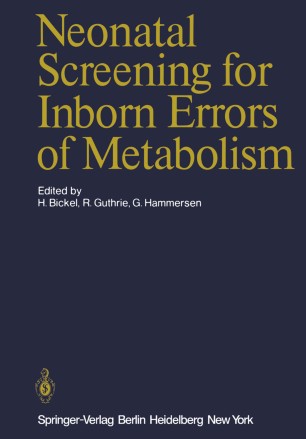 Although neonatal screening was begun only 20 years ago, and is consequently still in its early stages, it is already a classic example of efficient preventive pediatrics. At present, routine neonatal screening covering a satisfactory percentage of newborn babies is carried out in only a small part ofthe world. For some five diseases enough infants have been screened to give reasonably reliable information about the frequency of these diseases in various populations. Interesting differences are beginning to appear in popula­ tions of different ethnic and racial background. The medical importance of neonatal screening is especially obvious in metabolic diseases that are not too rare and for which effective treatment depends upon an early diagnosis, such as phenylketonuria, galactosemia, and - a more recent screening pro­ gram - hypothyroidism. About 1 of 4000 newborns is affected with hypothyroidism and can receive timely substitution with thyroid hormone. Of 34.5 million babies tested for phenylketonuria, 3000 cases have been diagnosed in time to prevent mental retardation by means of dietary therapy.