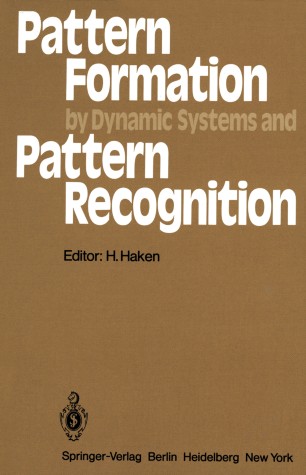 Proceedings of the International Symposium on Synergetics at Schloß Elmau, Bavaria, April 30 – May 5, 1979

This book contains the manuscripts of the papers delivered at the International Sym­ posium on Synergetics held at SchloB Elmau, Bavaria, Germany, from April 30 until May 5, 1979. This conference followed several previous ones (Elmau 1972, Sicily 1974, Elmau 1977). This time the subject of the symposium was "pattern formation by dynam­ ic systems and pattern recognition". The meeting brought together scientists from such diverse fields as mathematics, physics, chemistry, biology, history as well as experts in the fields of pattern recognition and associative memory. When I started this type of conference in 1972 it appeared to be a daring enter­ prise. Indeed, we began to explore virgin land of science: the systematic study of cooperative effects in physical systems far from equi~ibrium and in other disciplines. Though these meetings were attended by scientists from quite different disciplines, a basic concept and even a common language were found from the very beginning. The idea that there exist profound analogies in the behaviour of large classes of complex systems, though the systems themselves may be quite different, proved to be most fruitful. I was delighted to see that over the past one or two years quite similar conferences were now held in various places allover the world. The inclusion of prob­ lems of pattern recognition at the present meeting is a novel feature, however.