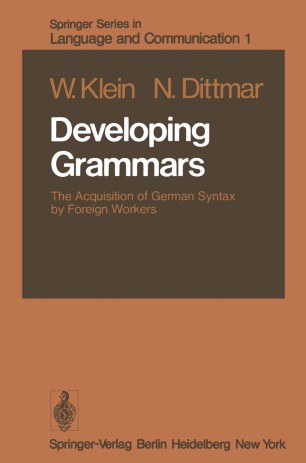 The Acquisition of German Syntax by Foreign Workers

Part of the Springer Series in Language and Communication book series (SSLAN, volume 1)

This study deals with variation in grammar both from a theoretical and an empirical point of view. In Part I (Chaps. 1-4), an attempt is made to char­ acterize this phenomenon within the broader context of what might be called the "fluctuating character of natu'ral language", and to develop suitable and precise descriptive techniques that account for it. The method which is pro­ posed here is called "variety grammar" - roughly speaking, this is a formal grammar with probabilistic weighting for an ordered set of varieties, such as dialects, sociolects, registers, or developmental stages. In Part II (Chaps. 5-8), this technique is applied to an important area of grammatical variation - to the process of second language acquisition in social context, based on a large investigation of the language behavior of foreign migrant workers acquiring German through everyday contacts. We have tried to characterize their "developing grammars" and to relate this complex developmental process to social and individual factors that determine it.