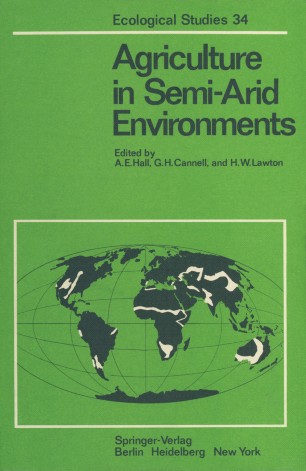 The semi-arid zones of the world are fragile ecosystems which are being sub­ stantially modified by the activities of mankind. Increasing human populations have resulted in greater demands on semi-arid zones for providing human susten­ ance and the possibility that this may enhance desertification is a grave concern. These zones are harsh habitats for humans. The famines that resulted from drought during the late 1960's and the 1970's in the African Sahel illustrated the unreliability of present agricultural systems in this zone. Large fluctuations in ag­ ricultural production have occurred in semi-arid zones of Australia, North Ameri­ ca, and the Soviet Union due to periodic droughts, even though considerable ag­ ricultural technology has been devoted to agricultural development in these zones. The challenge to mankind is to manage these different semi-arid zones so that pro­ ductivity is increased and stabilized, and environmental deterioration is decreased. Irrigation can be used to increase and stabilize agricultural production in semi-arid zones as discussed in Volume 5 of this series, Arid Zone Irrigation. The present volume, Agriculture in Semi-Arid Environments, focuses on dryland farming in semi-arid zones, and is relevant to the large areas of the world where rainfall is limiting and where water is not available for irrigation. This volume is designed to assist agricultural development in these areas and consists of reviews and analyses of available information by scientists working in Africa, Australia, and at the U ni­ versity of California.