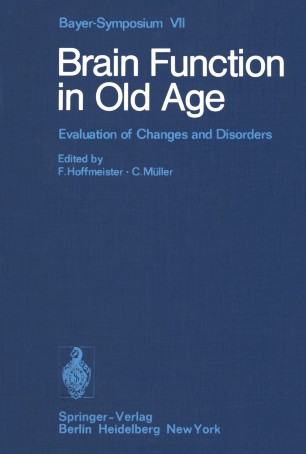 Evaluation of Changes and Disorders

Experimental gerontopsychology attempts to test causal hypotheses about old age-related behavioral changes by the manipulation of age-differences. An experimental treatment is introduced with the purpose of equating different age-groups with respect to a potentially relevant function. If the treatment results in an assimilation of the behavior of the different age-groups (age­ by-treatment interaction), differences in this function are con­ sidered as causal for the normally observed behavioral differ­ ence. If it does not result in an assimilation of the behavior of the different age-groups (main effect of treatment), differ­ ences in this function are considered as irrelevant for the nor­ mally observed behavioral difference. The different interpretations of age-by-treatment interactions and main effects of treatment in this kind of research are reasonable only if the experimental treatment actually results in an equalization of the age-groups with respect to the func­ tion of interest. As is shown, such a functional equalization can neither be demonstrated nor assumed in many cases. In such cases, studies with either age-group can be used to investigate hypotheses about potential causes for old age-related behavioral changes, studies with young subjects having important advantages over studies with old subjects. A test of causal relationships by age-by-treatment interactions is possible in cases where the experimental treatment evidently results in an equalization of the age groups with respect to the function in question. Unfortunately, the field of application for this kind of approach is rather limited.