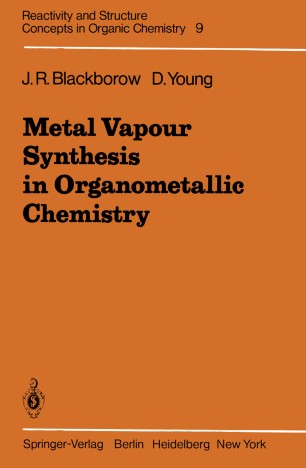 Metal Vapour Synthesis (MVS) can be defined as; "The use in synthesis of high temper­ ature gaseous species such as metal atoms by their reactions with themselves or other materials in a condensed phase. " This short book, covering the literature up to the middle of 1979, describes MVS in organic chemistry; i. e. the reactions of metal atoms with various, predominantly organic, substrates in the synthesis and reactivity studies of organic and organometallic compounds. In order to effectively describe all the underlying principles and to present a coesive picture of pertinent metal atom processes in condensed organic phases, some inorganic substrates such as rare gases, dinitrogen, dioxygen, dihalo­ gens, and inorganic halides have been included. For similar reasons, we have used, where relevent, information provided by the closely related technique of Matrix Isolation Spec­ troscopy (MIS). After an introductory chapter which gives the basis principles and includes a brief critique of the technique, the book is divided into three further chapters dealing respec­ tively with (a) experimental techniques, (b) behaviour of metal atoms in matrices, and (c) results of prep~rative experiments. While not being encyclopaedic the book describes or refers to all noteworthy areas if not in the deliberately short text in the many tables and figures.