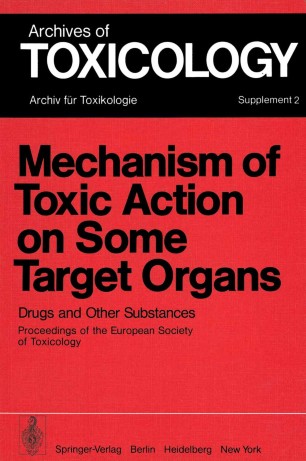 Mechanism of Toxic Action on Some Target Organs

Drugs and Other Substances Proceedings of the European Society of Toxicology Meeting held in Berlin (West), June 25—28, 1978

Part of the Archives of Toxicology book series (TOXICOLOGY, volume 2)

The first oral contraceptive became available in 1960 and since then these sub­ stances, which have been used by millions of women, have probably been the most widely studied group of drugs in medical history (Drill, 1966, 1977). Part of the evaluation oCoral contraceptives has involved their effect on the reproductive organs of women, with particular attention directed to evaluation of a possible carcinogenic effect of these steroids. To the extent that cancer of the reproductive organs is a common finding in women, the endogenous female sex hormones have been implicated in the occur­ rence of the cancer. The administration of estrogen has also been reported to in­ crease the incidence of cancer of the breast, cervix or endometrium in some strains or species of animals. Thus, because of the possible tumorigenic effect of estrogens there has been considerable interest in the relationship of oral contraceptives to cancer of the breast and genital tract.