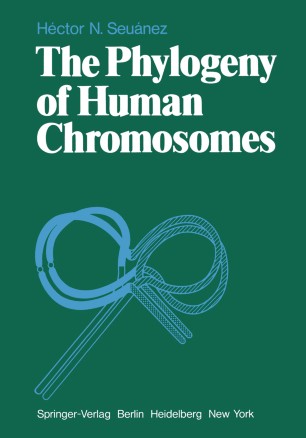 The Phylogeny of Human Chromosomes

The question of how man has emerged must be as old as human thought itself. However, it was not until last century that, amidst a storm of opposition and highly emotional criticism, man was first conceived as a product of evolution rather than creation. Moreover, it is not yet thirty years since the chemical composition and molecular structure of the hereditary material was fully understood or the chromosome number of man became known. It should not be surprising then, to find how little, at present, we understand how our genes and chromosomes operate, and how they have evolved during phylogeny. In this work I have discussed how our own chromosomes have been transmitted and altered as far back as we may trace their phylogeny into the past. To make the work more complete, the composition and evolution of our own genome had also to be consiered in order to understand some of the recent findings at the chromosome level. These have resulted from using methods for localizing repetitive and single copy DNA sequences in chromosomes. Moreover, the development of biochemical methods of studying evolution at the macromolecular level has not only led to a more complete understanding of the evolutionary mechanisms, but has enabled us to make comparisons with evolutionary change at the chromosome level. In addition, a simple reference to the fossil record was necessary, because impressive discoveries in recent years have supplied valuable data on man's evolution.