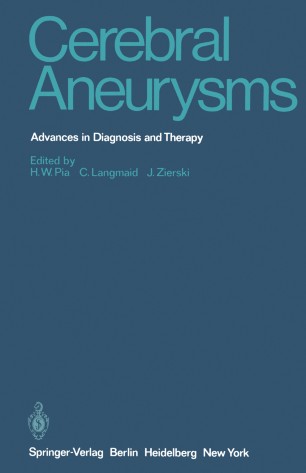 Advances in Diagnosis and Therapy

Microsurgery has brought about important changes and progress in the treatment of cere­ bral aneurysms in recent years. Only 12 years ago McKissock, one of the most experienced surgeons in the treatment of aneurysms pompared the results of operative and nonoperative treatment. He found that mortality and morbidity of cerebral aneurysms was not significantly affected by whether the patients have been operated upon or not. This view is held by many neursurgeons, and was confirmed by results of the Co-operative Study in 1969. In the review on treatment of aneurysms in Progress in Neurological Surgery in 1969, techniques such as encasement with plastic compounds, piloinjection, stereotactic copper or electric thrombosis and metallic thrombosis and profound hypothermia in anaesthesia were listed. In general, these techniques now seem to be of little more than historical interest. Progress in recent yeats has been so enormous that one may perhaps gain the impreSSion that the main problems in the treatment of aneurysms have been solved and that there are no more to be surmounted. This is dangerous and complacent thinking, such as Lord Moynihan indulged in during the thirties. For this reason we thought that the time had come to assemble a group of experts who could discuss the various unsolved and contro­ versial problems of aneurysm surgery in the friendly and relaxed atmosphere of a "work­ shop".