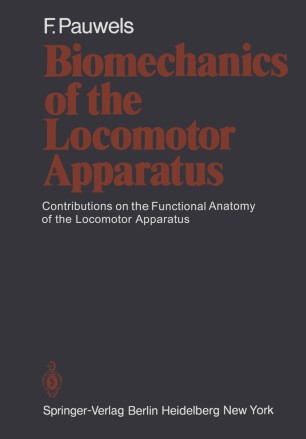 Biomechanics of the Locomotor Apparatus

Contributions on the Functional Anatomy of the Locomotor Apparatus

The contents of this book are based almost exclusively on purely anatomical researches. These were stimulated by questions posed in clinical practice. The results are directed to practicing surgeons. Their chronological sequence leads to a step by step development of theoretical bases and to a progressive rejection of old conceptions. Especially in the field of orthopaedic surgery, a responsible attitude is possible neither without solid anatomical knowledge, nor without an idea of functional relationships. W. Roux had already demonstrated this and he wanted his works of functional anatomy to be considered from this point of view. He above all preoccupied himself with a uniform theory of functional adaptation. Thus it is understandable that the theories ofRoux formed the basis from which to start. Our own researches seemed at first to corroborate the ideas of Roux, at least in part. This is still evident in the monograph concerning fractures of the femoral neck. Later it appeared that ST. KROMPECHER had made a step forwards in the matter of chondrogenesis when he abandoned the shear theory postulated by Roux and held that compression was the only effective stimulus for the forma­ tion of cartilage. The research concerning the healing of fractures relies partly on the theory of KROMPECHER which was new at that time. But ultimately more and more discoveries could no longer be explained by this conception which was only slightly different from the older theories (1. WOLF, W. Roux, W.