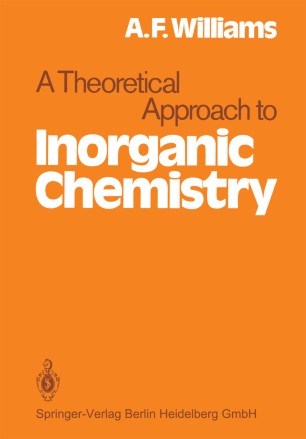 A Theoretical Approach to Inorganic Chemistry

Dr. Alan Williams has acquired a considerable experience in work with transition metal complexes at the Universities of Cambridge and Geneva. In this book he has tried to avoid the variety of ephemeral and often contradictory rationalisations encountered in this field, and has made a careful comparison of modern opinions about chemical bond­ ing. In my opinion this effort is fruitful for all students and active scientists in the field of inorganic chemistry. The distant relations to group theory, atomic spectroscopy and epistemology are brought into daylight when Dr. Williams critically and pedagogic­ ally compares quantum chemical models such as molecular orbital theory, the more specific L. C. A. O. description and related "ligand field" theory, the valence bond treat­ ment (which has conserved great utility in antiferromagnetic systems with long inter­ nuclear distances), and discusses interesting, but not too well-defined concepts such as electronegativity (also derived from electron transfer spectra), hybridisation, and oxid­ ation numbers. The interdisciplinary approach of the book shows up in the careful consideration given to many experimental techniques such as vibrational (infra-red and Raman), elec­ tronic (visible and ultraviolet), Mossbauer, magnetic resonance, and photoelectron spectra, with data for gaseous and solid samples as well as selected facts about solution chemistry. The book could not have been written a few years ago, and is likely to re­ main a highly informative survey of modern inorganic chemistry and chemical physicS. Geneva, January 1979 C. K.