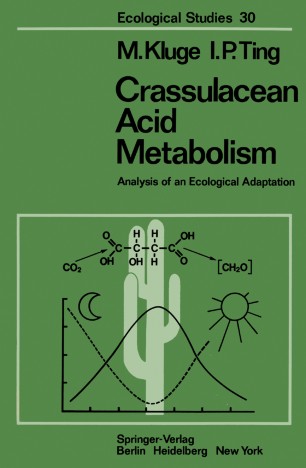 Analysis of an Ecological Adaptation

The acid metabolism of certain succulent plants, now known as Crassulacean Acid Metabolism (CAM) has fascinated plant physiologists and biochemists for the last one and a half centuries. However, since the basic discoveries of De Saussure in 1804 that stem joints of Opuntia were able to remove CO from the 2 atmosphere during the night, and of Heyne in 1815 (see Wolf, 1960) that organic acids accumulate in the leaves of Bryophyllum calycinum during the night, the two main aspects of CAM, diurnal CO gas exchange and metabolism of malic acid, 2 have first been studied nearly independently. Hence, it is not surprising that most research to elucidate the mechanism of CAM has been during the last 15 years since CO exchange and malate metabolism were studied and interpreted in its 2 context. These efforts finally resulted in a clear realization that the CAM phenom­ enon is a variation on the mode of how plants can photosynthetically harvest CO from the atmosphere. 2 The interpretation of CAM in this sense was stimulated by the discovery of another variant of photosynthesis, the C -pathway (see Black, 1973; Hatch and 4 Slack, 1970; Hatch, 1976). Because this newly discovered photosynthetic pathway is recognized to be very closely related to the CAM pathway, the work on the latter became intensified during these last years.