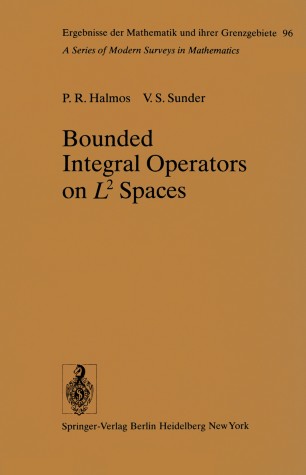 The subject. The phrase "integral operator" (like some other mathematically informal phrases, such as "effective procedure" and "geometric construction") is sometimes defined and sometimes not. When it is defined, the definition is likely to vary from author to author. While the definition almost always involves an integral, most of its other features can vary quite considerably. Superimposed limiting operations may enter (such as L2 limits in the theory of Fourier transforms and principal values in the theory of singular integrals), IJ' spaces and abstract Banach spaces may intervene, a scalar may be added (as in the theory of the so-called integral operators of the second kind), or, more generally, a multiplication operator may be added (as in the theory of the so-called integral operators of the third kind). The definition used in this book is the most special of all. According to it an integral operator is the natural "continuous" generali­ zation of the operators induced by matrices, and the only integrals that appear are the familiar Lebesgue-Stieltjes integrals on classical non-pathological mea­ sure spaces. The category. Some of the flavor of the theory can be perceived in finite­ dimensional linear algebra. Matrices are sometimes considered to be an un­ natural and notationally inelegant way of looking at linear transformations. From the point of view of this book that judgement misses something.