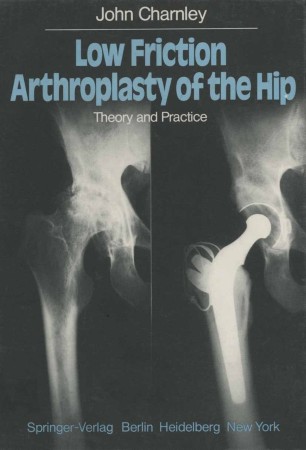 Low Friction Arthroplasty of the Hip

The theme of this work is the application of the engmeermg theory of frictional torque to total hip replacement. The author adhered tenaciously to this theory, involving the use of a small-diameter femoral head, throughout the epoch when the large-diame­ ter, metal-to-metal design dominated the field. During that considerable period general satisfaction with the early results rendered criticisms of the large-diameter head unwelcome. There was a formidable array of counter­ criticism: the small head would pierce a film of synovial fluid; the small head would wear the socket too rapidly; the small head would always have a high risk of dislocation; detachment of the trochanter, to achieve precise orientation for the small head, was unacceptable. But all these objections have now been largely overcome. Lubrication of high molecular weight polyethylene (HMWP) on metal is now accepted as being mainly by the boundary regime with thick fluid films playing no part. We now know that HMWP can indeed tolerate the very high stresses imposed by the small head and in tribological theory there may even be some advantage in high stress. Dislocation is now known not to be an automatic sequel to the small head.