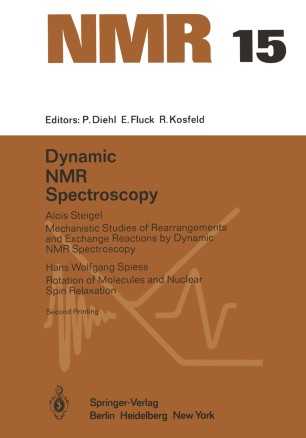 Since the first successful NMR experiments in 1946 it was well appreciated that dynamic processes play an important role in the NMR spectroscopy of bulk matter [1]. Early theories on the dependence of the relaxation parameters Tl and T2 on the motions of nuclear spins were successful in explaining the dipolar broadening of the NMR signal in solids and the motional narrowing in liquids [2]. With the discovery of chemical shifts and spin-spin couplings another type of dynamical process affect­ ing the NMR line shape became apparent, the chemical exchange. As a consequence, dynamical NMR studies split into two groups differing not only in the dynamical topics but also in the method of investigation: physical studies of the motion of spins in liquids and solids by measurement of the relaxation times of single resonances and, on the other hand, chemical studies based on band shape analysis of NMR spectra recorded under steady state conditions. The two fields of research lost some of their basic differences with the development of the Fourier transform NMR method [3], which allows the measurement of relaxation times of different resonances at the same time, i. e. the study of differential motional behavior of different parts of mole­ cules, thus providing a new tool in conformational analyses. For example, informa­ tion can be obtained by this method on the relative importance of overall motions and internal motions [4].