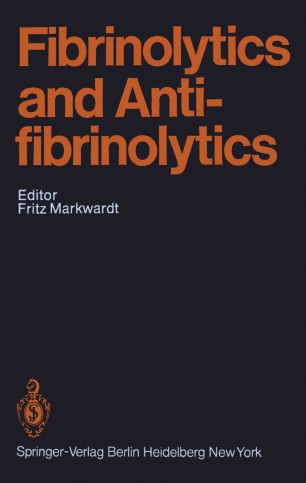 Disturbances of haemostasis and thromboembolic disorders still constitute a great problem in clinical practice. Increasing insight into the mechanism of blood coagula­ tion has led to more effective therapy and prophylaxis. Particularly, the understand­ ing of the biochemistry of fibrinolysis has provided possibilities for the pharma­ cological interference of these processes, which has resulted in effective haemostatic agents and useful antithrombotic ones. The development of antifibrinolytics for interfering with pathological fibrinolytic processes is nearly complete and has led to the development of drugs essential to the therapy of hyperfibrinolytic bleeding. The search for fibrinolytics for dissolving intravascular thrombi has led to highly effective compounds. This development is still under way and promising results are hoped. Spontaneous dissolution of blood clots is a phenomenon which was described a century ago. First investigations of this process assured that there is in the organism a system capable of removing the fibrin which is formed during blood coagulation after it has fulfilled its physiological function. This fibrinolytic system is specifically adapted to the degradation of insoluble fibrin into soluble degradation products. In the past 30 years, thorough investigation of this system has clarified the fibrinolytic process, its physiological role and its meaning as a pathogenetic principle. A good knowledge of these processes is required for an understanding of the effects and side effects of fibrinolytics and antifibrinolytics, which comprise the basis of methods for the detection of fibrinolytic processes in the organism and of the control of therapy with these drugs.