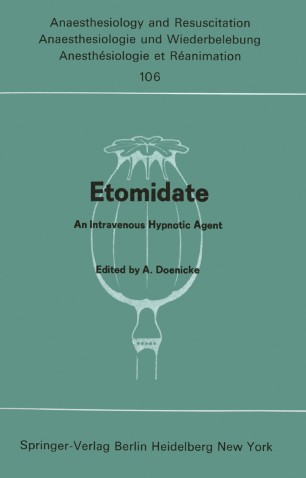 The question how to induce general anaesthesia without problems has been asked repeatedly by anaesthetists and pharmacologists. P. A. JANSSEN developed etomidate and published this substance in 1971 as "a potent short-acting and relatively atoxic intravenous hypnotic agent in rats". In 1974 after several years of experimental and clinical trial the barbiturate-free hypnotic etomidate (soon marketed as Hypnomidate) was introduced to numerous auditors at the occasion of the IV. European Congress of Anaesthesiologists in Madrid. As the authors extended their essays, the actuality of the present book is given. The conclusion mentions the new solution of etomidate base in 35 % propylene glycol. It is expected that the disadvantageous effects - venous pain during injection and associated involuntary muscle movement- will largely be eliminated by using the new formula of etomidate after premedication of fentanyl. Mlinchen, August 1977 Alfred DOENICKE TABLE OF CONTENTS The Experimental Pharmacology of Etomidate, a New Potent, Short-Acting Intravenous Hypnotic (R. S. RENEMAN and P. A. JANSSEN) •. . . . •• 1 Protein Binding of Etomidate (G. A. MANNES and A. DOENICKE) ••••. . . 6 The Effect of Intra-Arterial Injection of Etomidate and Thiopental on the Skeletal Muscle- and Arterial Wall-Structures (R. S. RENEMAN, F. VERHEYEN, R. KRUGER, W. VAN GERVEN and M. BORGES) . . •. . •• 9 Interaction between Etomidate and the Antihypertensive Agents Propanolol andoC-Methyl-Dopa (R. S. RENEMAN, W. VAN GERVEN and R. KRUGER) ••. •. . . 15 Teratogenicity of Etomidate (A. DOENICKE and M. HAEHL) •. ••. •.