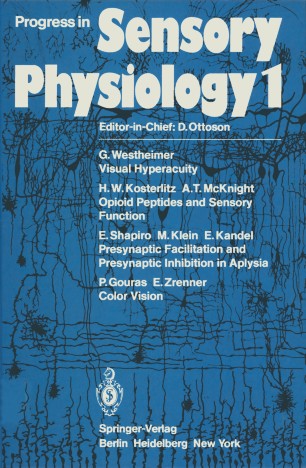 I fancy that many of you, like myself, have woken up in the night with a "sleeping" arm or leg. It is a very peculiar feeling to have that arm or leg, cold and lifeless, hanging there at your side as if it were something which does not belong to you. In such situations you recover some of the motor functions before the sensory functions, which en­ ables you to move the limb like a pendulum. For a few sec­ onds the arm functions as an artificial limb - a prosthesis without sensors. In general we are not aware of the importance of our sensory organs until we lose them. You do not feel the pressure of your clothes on the skin or the ring on your finger. In the nineteenth century such phenomena generally named adaptation, were studied to a great extent, partic­ ularly in vision, as well as in the so-called lower senses. The question whether sensory adaptation was due to changes in the peripheral sensory receptors or in the central nervous structure remained in general open until the 1920s. Then the development of the electronic arsenal gave us the means to attack the problem by direct observations of the electrical events in the peripheral as well as the central nervous system. But even today there are still some blank areas in our knowledge of adaptation.