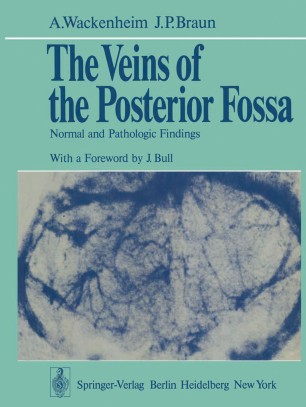 The Veins of the Posterior Fossa

It is a privilege and pleasure to write a foreword to this work. Who, twenty years ago, would have thought that a whole book could be devoted to the veins of the posterior fossa? Even today the standard text-books of anatomy only give a paragraph to the subject. Thanks to the dedicated work of rather a few neuroradiologists our knowledge has now reached a very sophisticated level. The careful correlation of anatomical dissection with the angiographic image has achieved this, but without the aid of subtraction (discovered by a world figure in neuroradiology - Professor ZIEDSES DES PLANTES) the subject would not be as advanced as it is. The authors are to be congratulated not only for presenting the most up to date anatomical information but also for showing how wide the applications are in the clinical field by the careful analysis of displacements of veins, many of which were quite unrecognised only a very few years ago. Drs W ACKENHEIM and BRAUN are in the forefront of this discipline to which they and the French school have contributed so much. Also it was their great enthusiasm and drive which led to the birth of the European Society of Neuroradiology, the first meeting of which was held in Colmar in September 1969. The Society has flourished under their guidance and very successful annual meetings have been held for nearly a decade.