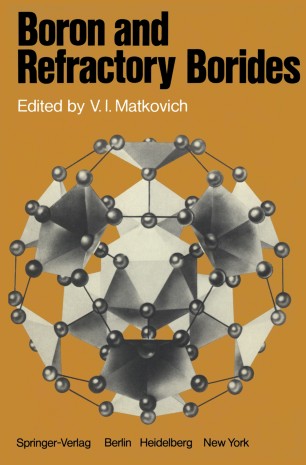 V. I. MATKOVICH During the meeting of the International Symposium on Boron held in October, 1972 in Tbilisi, U.S.S.R., the idea was proposed to assemble a review of boron and refractory borides by the specialists present. The advantages of such a work were immediately apparent. Such diverse applications of borides as in protective armor, nuclear reactors, coat­ ings, reinforcement, etc. can hardly all be presented in sufficient detail by a single author. On the other hand it was also recognized that with so much specialization, some areas of interest may not be covered. Within the last decade or two a number of areas have been developed in which the use of refractory borides is growing and improvements are being actively explored. Thus, a number of borides have considerable potential as reinforcing material for plastics or light metals, though only boron fibers have been firmly established up to the present. Ap­ plication of flakes and films for two-dimensional reinforcement appears attractive, although the high cost of materials and development repre­ sents a considerable barrier. A number of borides have been used to manufacture lightweight protec­ tive armor. In this area relatively fast changes seem to be taking place as improvements in performance and weight are made. Boron carbide has found considerable use in this application and new developments exploit the light weight of beryllium borides.