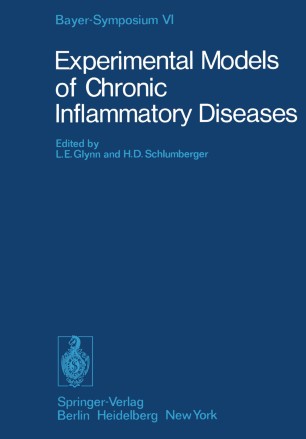 With the introduction of antibiotics acute inflammatory disease has ceased to be the dominant problem in general medical practice and its place is now increasingly occupied by chronic inflamma­ tory disease of which the rheumatic diseases constitute the most important group. lwo aspects of these diseases need to be consid­ ered, their aetiology and their pathogenesis. In some respects the latter is more important since even when the aetiology is known, as for example the haemolytic streptococcus in rheumatic fever, the mechanism by which the infecting agent accomplishes the development of the lesions that characterise the disease are still largely unknown. Still more so is this the case in rheuma­ toid arthritis and other chronic inflammations where the aetio­ logical agents are unknown. In an attempt to clarify the pathogenic mechanisms involved, sev­ eral attempts have been made to induce comparable lesions in ex­ perimental animals, partly to test underlying hypotheses, and partly to provide test situations for the trial of new therapeu­ tic agents. In view of the deficiencies in the current drug treat­ ment of chronic inflammatory disease there are many who feel that this is largely due to the inadequacy of the models avail­ able for test purposes.