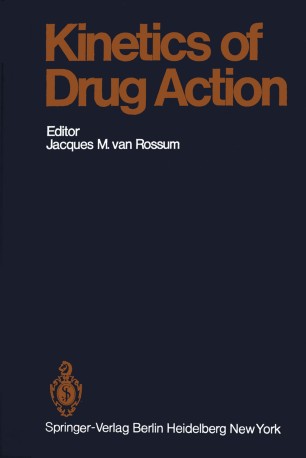 Most drugs, toxins, hormones, and the like bring about their biologic actions by reacting with specific receptors somewhere in the body. Scientists working in all areas of biologic science have shown increasing interest in the analysis of drug-receptor interactions in the broadest sense. Studies of drugs (binding) to receptors in situ and to isolated and partly purified receptors are becoming common practice. The action of a drug in the body is, however, a kinetic event not only with respect to transport of drug molecules to the environment of the receptors, but also with respect to the drug-receptor interaction itself. Kinetics of Drug Action is an integrative approach to drug transport through the body, membrane transport toward the receptors, and the kinetics of drug­ receptor interaction. This volume is aimed at providing a critical and penetrating study of the problems relevant to the kinetics or drug action from drug dosage to the final response. It is felt that the critical surveys presented in this volume will contribute significantly to receptor study research in various biologic fields and to a better understanding of drug action. I would like to express my gratitude to our secretary Miss MARGOT JANSSEN for the extensive typing of manuscripts and to our laboratory assistant Miss COBY HURKMANS for her dedicated assistance in the correcting some of the manuscripts and preparating the index.