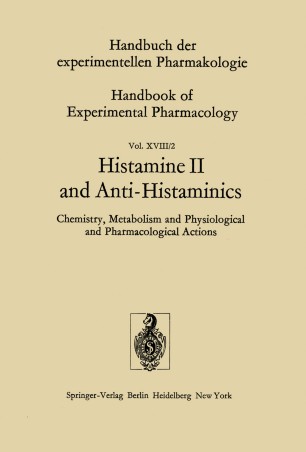 In the preface to Part I of this volume, which appeared in 1966, we stated: " ... we had to leave the Antihistaminics for another volume of unpredictable dimensions. In 1924, eight pages inserted in a Chapter on Mutterkorn by Arthur R.Cushing were considered enough, in Vol. II, Part II, pp. 1319-1326 of the Hand­ buch. Now 922 pages did not suffice to cover all aspects of the subject ... the subject has been expanded in so many directions, that the anti histaminic part had to be excluded from the present volume. Possibly, another thousand pages will be necessary to cover what remains of the subject."* This prediction was fulfilled, and the subject of histamine has grown to such an extent that dealing with the antihistaminics only in Part II would be quite inadequate. It is imperative to include the large number of recent findings on the subject of histamine, namely the splitting of its pharmacologic receptors, and the great variety of new contributions on ,its participation in physiopathologic phenomena, metabolism and interaction with newly found mediators.