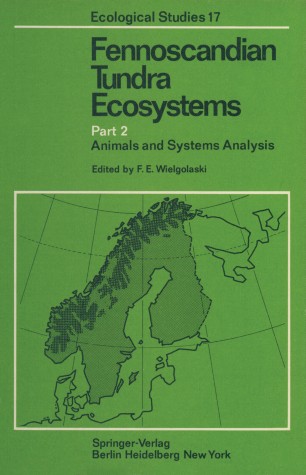 Animals are important components of any ecosystem and it is impossible to describe structure and funCtioning of the Fennoscandian tundra ecosystems without including this part of the system. However, the strong diversity between functionally highly different fauna groups makes it impossible to study all groups in great detail with the funds and expertise available in Fennoscandia. Relatively few productivity studies were carried out on animals in Fenno­ scandian tundra regions before the IBP projects started in 1969-1970. Within IBP, more fauna groups have been investigated in the Norwegian tundra project than in the other countries, due to better financial support. Even in Norway, however, only a limited number of invertebrate and vertebrate taxons is studied. General lack of information on the same animals in various parts of the Fennoscandian tundra makes it more difficult to present structural and functional comparisons of fauna for the whole region than in plants and microorganisms (see Part 1 of Fennoscandian Tundra Ecosystems). Brief surveys on faunal problems within the area are given in the introduction to the animal section, and general aspects are also discussed in the four first papers of the volume.