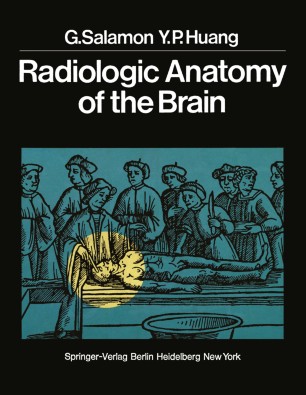 Radiologic Anatomy of the Brain

Despite all recent advances, the most important progress in neuroradiol­ ogy has been in our knowledge of the anatomy of the nervous system. DANDY'S injection of ventricles and cisterns with air, SICARD'S studies of the epidural and subarachoid space with lipiodol, MONIZ'S work on cerebral arteries and veins, and, more recently, DJINDJIAN'S and DI CHIRO'S investiga­ tions of spinal arteries, have modified, refined and expanded current knowl­ edge of anatomy of the central nervous system. As described by LINDGREN, "the neuroradiologist dissects the region of interest with x-rays like a surgeon with a scalpel". In fact, neuroradiologic examination is nothing less than an anatomic survey in vivo, using multiple orthogonal projections. The authors of this book are convinced that frequent reference to normal anatomy is currently the most useful and rewarding means of understanding neuroradiologic problems. Arteries and veins of the brain may be considered in terms of the sulci, gyri, cisterns, ventricles, basal nuclei, and cortical centers. In this book, efforts have been made to match anatomic elements of the ventricles, cisterns, and vessels to the region being studied. The foundation of this book lies in the detailed anatomico-radiologic corre­ lations, demonstrated by numerous photographs of dissected specimens, radiographs of injected specimens, anatomic drawings, diagrams, and normal cerebral angiograms and encephalograms. Indeed, there is no region in the central nervous system which cannot be delineated by its relationships with arteries, veins, cisterns, and ventricles.