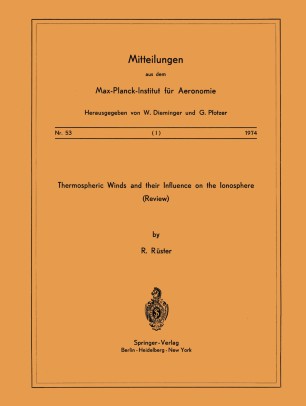 Thermospheric Winds and Their Influence on the Ionosphere

It is well known that thermospheric winds play an important role in the dynamics of the upper atmo­ sphere and are of major importance for the behaviour of the ionosphere. The methods of calculating these winds are discussed briefly. Comparisons of the calculated winds with observational data are carried out. Some main effects of the winds on the dynamical behaviour of the ionized as well as neutral part of the upper atmosphere are discussed. 2. Calculation of thermospheric winds The system of equations describing the dynamical behaviour of the thermosphere and the ionosphere consists of: b a neutral atmosphere ionosphere continuity equations continuity equations for different ion species and electrons equations of motion (winds) equations of motion for the different constituents (ambi­ polar diffusion, wind induced drifts, ~ x ~ -drifts) energy balance equations energy balance equations Due to collisions between charged and neutral particles there is an interaction between the ionized and neutral gas. Both sets of equations are coupled, therefore, by the respective drag terms. Because of the complexity of the mathematics involved in solving all equations simultaneously, different approaches have been made to solve parts of this system of differential equations under additional assumptions and restrictions. There are two general approaches: a. ) Solution of the equation of motion of the neutral atmosphere together with the ionospheric continuity equations and equations of motion of the ions.