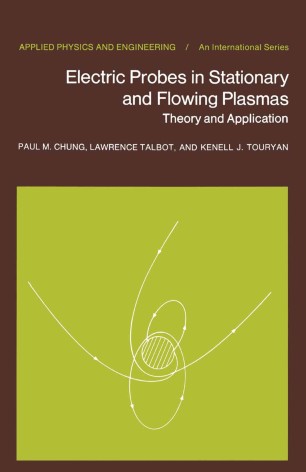 The electric probe has long been used as a fundamental diagnostic tool for measuring the local properties of a plasma. Since Langmuir first developed the electric-probe technique in 1924, probes have been used to measure electron densities and temperatures in a wide variety of gaseous ionized media, such as electric discharges, afterglows, ionizing shock waves, flames, MHD, and plasma-jet flows, reentry vehicle flow fields, and atmospheric and space plasmas. The first systematic account of modern theories of electriC-probe behavior was given by Chen (1965), who also provided practical information on experimental techniques. A subsequent survey by Swift and Schwar (1970), which was representative of results contained in the literature through 1969, included additional information on some of the modern theories and on practical details of probe utilization. The purpose of this volume is to supplement the previously mentioned two works by providing an account of a large body of the up-to-date informa­ tion available on electric probes, particularly in the areas of transitional and continuum-flow phenomena, and by offering, for all domains of probe appli­ cation, a critical appraisal of the more significant probe theories and experi­ mental investigations in the literature.