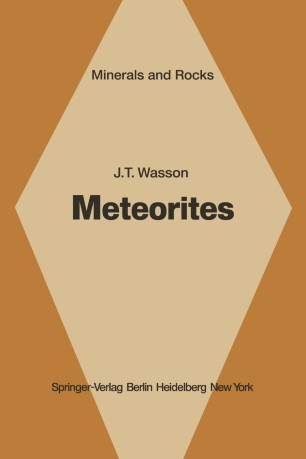 Part of the Minerals and Rocks book series (MINERALS, volume 10)

My goal in writing this book was to provide an introduction to meteorite science and a handbook on meteorite classification. Insofar as I succeeded it should prove useful both to the practicing professional and to university students at the upper-division and graduate levels. I originally intended the book to be nearly twice as long. The second half was to be a review of properties relating to the origin of each group of meteorites. Chapter XVIII is an example of how these later chapters would have looked, although most would not have been as interpretative. These chapters would have been useful chiefly to meteorite researchers looking for a quick summary of group properties; they were not written because of lack of time. Perhaps I will start to prepare this "second volume" in a year or so when my family and I have recovered from the preparation of the present volume. Although some parts of the classification portion are mildly icono­ clastic, I have attempted either to avoid the inclusion of speculative interpretations or to flag them with a caveat to the reader. I have relaxed these principles somewhat in Chapter XVIII to conserve space, but even there the discussion of alternative speculations should give the reader a feeling for the degree of uncertainty attached.