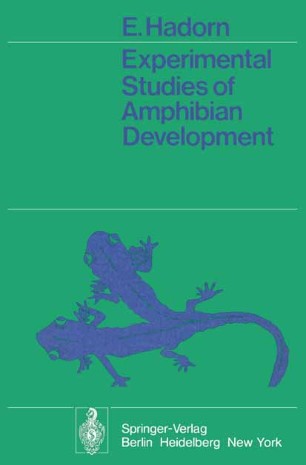 Although this is basically a translation of the second German edition published in 1970, more recent experimental findings have, in several instances, been incorporated into the text. Furthermore, we have tried to explain some of the experiments, and their possible interpretations, in a more precise way. I am very grateful to Dr. David Turner; in addition to translating the text, he was able, thanks to his experience in developmental biology, to suggest a number of improvements in the course of our collaborative discussions. Zurich, Spring 1974 ERNST HADORN Preface to the Second German Edition The guiding principle of the first edition remains in force. That is, the methods and results of developmental research are intro­ duced wherever possible with the aid of experiments on am­ phibians. However, the scope of the material has been substantially ex­ panded in newly introduced chapters on the migrations and affinities of somatic and germ cells as well as on the action of genetic factors in early development. These are fields of study which are at the center of today's research. In addition, numerous new findings have been incorporated into the text. The author hopes that this little book will continue to facilitate understanding of exciting research problems, for the interested layman as well as for the teacher and student of biology.