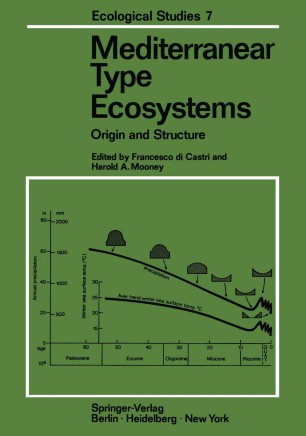 No other disjunct pieces of land present such striking similarities as the widely sepa­ 1 rated regions with a mediterranean type of climate, that is, the territories fringing the Mediterranean Sea, California, Central Chile and the southernmost strips of South Mrica and Australia. Similarities are not confined to climatic trends, but are also reflected in the physiognomy ofthe vegetation, in land use patterns and frequently in the general appearance of the landscape. The very close similarities in agricultural practices and sometimes also in rural settlements are dependent on the climatic and edaphic analogies, as well as on a certain commonality in qdtural history. This is certainly true for the Mediterranean Sea basin which in many ways represents a sort of ecological-cultural unit; this is also valid for CaUfornia and Chile, which were both settled by Spaniards and which showed periods of vigorous commercial and cultural interchanges as during the California gold rush. One other general feature is the massive interchange of cultivated and weed species of plants that has occurred between the five areas of the world that have a mediterranean-type climate, with the Mediterranean basin region itself as a major source. In spite of their limited territorial extension, probably no other parts of the world have played a more fundamental role in the history of mankind. Phoenician, Etruscan, Hellenic, Jewish, Roman, Christian andArab civilizations, among others,haveshapedmanyofman's present attitudes, including his position and perception vis-a-vis nature.