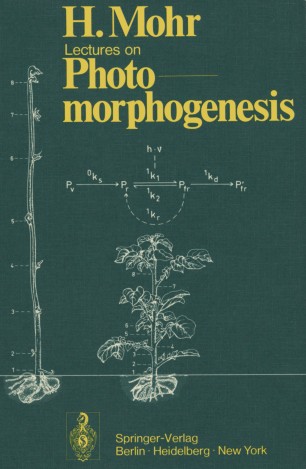 The discovery of the reversible red far-red control of plant growth and development and the subsequent in vivo identification and isolation of the photoreceptor pigment, phyto­ chrome, constitutes one of the great achievements in modern biology. It was primarily a group of investigators at the Plant Industry Station, Beltsville, Mary­ land, headed by the botanist H.A. BORTHWICK and the physical chemist S.B. HENDRICKS, who made the basic discoveries and developed a theoretical framework on which the current progress in the field of phytochrome is still largely based. While the earlier development of the phytochrome concept has been covered by a num­ ber of excellent articles by the original investigators [104,105,33,238] as well as by others who joined the field of phytochrome research later [72, 109, 219], a comprehensive and up-to-date treatment of photomorphogenesis is not available at present. Since it seems to be needed for teaching as well as for researchers I have tried to summarize the present state of the field, reviewing the historical aspects of the phytochrome story only insofar as they are required to understand the present situation. The emphasis of my treatment will be on developmental physiology ("photomorphogenesis") rather than on phytochrome per se.