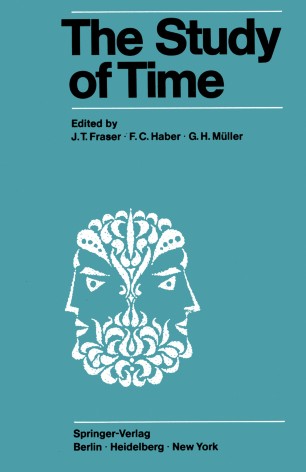 The Study of Time

The First Conference of the International Society for the Study of Time was held at the Mathematisches Forschungsinstitut at Oberwolfach in the Black Forest, Federal Republic of Germany from Sunday, 31 August to Saturday, 6 September, 1969. The origin of this conference and the formation of the Society goes back to a proposal due to J. T. Fraser that was discussed at a conference on "Interdisciplinary Perspectives of Time" held by the New York Academy of Sciences in January, 1966. It was unanimously agreed than that an international society should be formed on an interdisciplinary basis with the object of stimulating interest in all problems concerning 'time and that this object could best be attained by means of conferences held at regular intervals. J. T. Fraser was elected Secretary, S. Watanabe Treasurer, and I was elected President. It was agreed, at my suggestion, that the organization of the first conference of the newly formed Society be left to a committee of these three officers, on the understanding that they would invite authorities on the role of time in the various special sciences and humanities to form an Advisory Board to assist them. One of the main difficulties in seeking support for an interdisciplinary conference is that most foundations confine their interest exclusively either to the sciences or to the humanities.