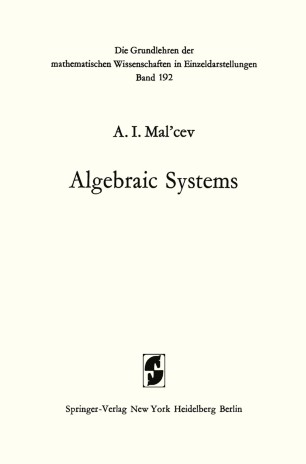 As far back as the 1920's, algebra had been accepted as the science studying the properties of sets on which there is defined a particular system of operations. However up until the forties the overwhelming majority of algebraists were investigating merely a few kinds of algebraic structures. These were primarily groups, rings and lattices. The first general theoretical work dealing with arbitrary sets with arbitrary operations is due to G. Birkhoff (1935). During these same years, A. Tarski published an important paper in which he formulated the basic prin­ ciples of a theory of sets equipped with a system of relations. Such sets are now called models. In contrast to algebra, model theory made abun­ dant use of the apparatus of mathematical logic. The possibility of making fruitful use of logic not only to study universal algebras but also the more classical parts of algebra such as group theory was dis­ covered by the author in 1936. During the next twenty-five years, it gradually became clear that the theory of universal algebras and model theory are very intimately related despite a certain difference in the nature of their problems. And it is therefore meaningful to speak of a single theory of algebraic systems dealing with sets on which there is defined a series of operations and relations (algebraic systems). The formal apparatus of the theory is the language of the so-called applied predicate calculus. Thus the theory can be considered to border on logic and algebra.