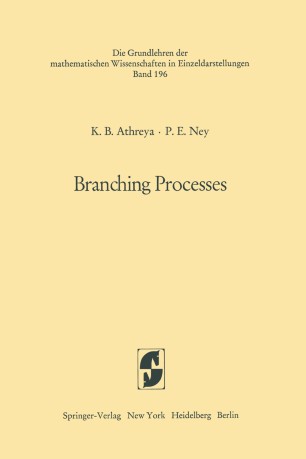 The purpose of this book is to give a unified treatment of the limit theory of branching processes. Since the publication of the important book of T E. Harris (Theory of Branching Processes, Springer, 1963) the subject has developed and matured significantly. Many of the classical limit laws are now known in their sharpest form, and there are new proofs that give insight into the results. Our work deals primarily with this decade, and thus has very little overlap with that of Harris. Only enough material is repeated to make the treatment essentially self-contained. For example, certain foundational questions on the construction of processes, to which we have nothing new to add, are not developed. There is a natural classification of branching processes according to their criticality condition, their time parameter, the single or multi-type particle cases, the Markovian or non-Markovian character of the pro­ cess, etc. We have tried to avoid the rather uneconomical and un­ enlightening approach of treating these categories independently, and by a series of similar but increasingly complicated techniques. The basic Galton-Watson process is developed in great detail in Chapters I and II.