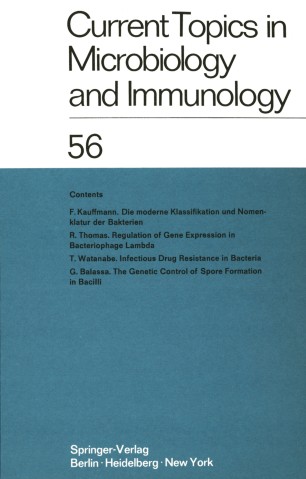 The expression of many bacterial genes adapts itself in an almost in­ stantaneous and reversible way to specific environmental changes. More specifically, the concentration of a number of metabolites, a function of the amounts of enzymes involved in their synthesis or degradation, in turn retroacts on the rate of synthesis of these enzymes. The genetic bases for this regulation were established by JACOB and MONOD (1961). These authors also showed how the known elements of these regulatory mechanisms could be connected into a wide variety of circuits endowed with any desired degree of stability, in order to account for essentially irreversible processes like differentiation (MONOD and JACOB, 1961). The general principles used by JACOB and MONOD in their study of negative regulation were extended to positive regulation by ENGLESBERG et al. (1965). An independent approach permitted the discovery of positive controls in temperate bacteriophages (see below, III). Each control operation is mediated by a pair of complementary genetic elements (hereafter called "control cell"): a control gene which produces a l control (or regulator) protein and a control site which is the target for the regulator protein. Negative control means that the control protein (repressor) prevents gene expression. One deals with positive control when the control protein (activator) is necessary for this expression. It has become apparent that, as initially postulated by JACOB and MONOD, control of gene expression operates, at least to a large extent, at the transcriptional level.