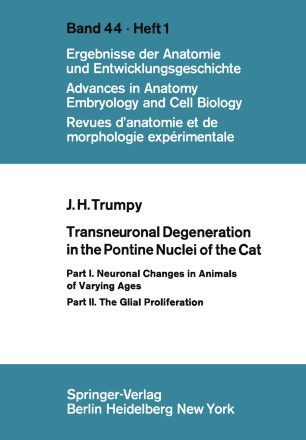 Transneuronal Degeneration in the Pontine Nuclei of the Cat

The present study was performed to elucidate the mechanism of a rapid nerve cell loss in the nuclei pontis described after mesencephalic lesions in young cats by Torvik (1956). He observed that hemisection of the mesencephalon caused an extensive disintegration of nerve cells in the homolateral nuclei pontis within four days after the operation. Mter lesions of the caudal part of the mesencephalon a severe neuronal loss was noted also in the inferior olive. Most of the degenerating neurons appeared to pass through a stage of pyknosis and karyorhexis before disintegration, but other types of neuronal change were also described. The changes were considered caused by deafferentation of the pontine nuclei and were regarded as a kind of transneuronal degeneration. During this degeneration an unusual type of glial proliferation was also observed. The nature of the glial pro­ liferation will be dealt with in Part II of this study while the neuronal changes will be studied here. A similar loss of pontine neurons had been described earlier after cortical lesions and after hemisection of the brain stem (Monakow, 1882; Borowiecki, 1911). However, the animals used by these authors were kept alive for several weeks and the acute stages of nerve cell degeneration were not studied. No clear ex­ planation for the changes was given. The type of nerve cell degeneration described by Torvik (1956) differs markedly from the transneuronal degeneration described in other nuclei in the cat and other animals.