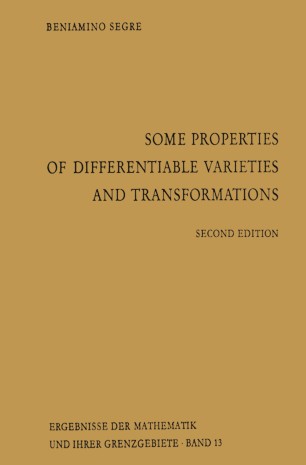 Some Properties of Differentiable Varieties and Transformations

With Special Reference to the Analytic and Algebraic Cases

The present volume contains, together with numerous addition and extensions, the course of lectures which I gave at Pavia (26 September till 5 October 1955) by invitation of the «Centro Internazionale Mate­ matico Estivo». The treatment has the character of a monograph, and presents various novel features, both in form and in substance; these are indicated in the notes which will be found at the beginning and end of each chapter, Of the nine parts into which the work is divided, the first four are essentially differential in character, the next three deal with algebraic geometry, while the last two are concerned with certain aspects of the theory of differential equations and of correspondences between topo­ logical varieties. A glance at the index will suffice to give a more exact idea of the range and variety of the contents, whose chief characteristic is that of establishing suggestive and sometimes unforeseen relations between apparently diverse subjects (e. g. differential geometry in the small and also in the large, algebraic geometry, function theory, topo­ logy, etc. ); prominence is given throughout to the geometrical view­ point, and tedious calculations are as far as possible avoided. The exposition has been planned so that it can be followed without much difficulty even by readers who have no special knowledge of the subjects treated.