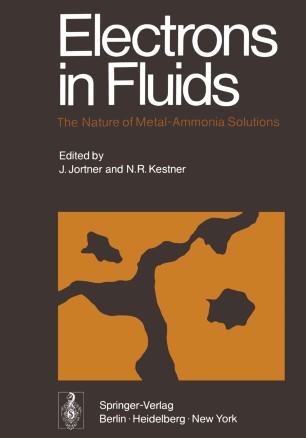 The Nature of Metal—Ammonia Solutions

Colloque Weyl I was convened in June 1963 at the Catholic University of Lille to commemorate one hundred years of the study of metal-ammonia solutions. This memorable event, which involved a "single-particle excitation", inspired Gerard Lepoutre to assemble an international group of physicists and chemists to discuss the nature of metal-ammonia solutions. Colloque Weyl II, which took 1969, was initiated as a place at Cornell Universtiy, Ithaca, N.Y. in June "cooperative interaction" between M. J. Sienko, J. L. Dye, J. J. Lagowski, G. Lepoutre and J. C. Thompson. That meeting made it clear that Colloque Weyl should be continued in order to promote the fruitful exchange of ideas set in motion at Lille and at Cornell. Colloque Weyl III came into being as the result of a resolution passed at the Cornell meeting, Tel-Aviv University being the suggested site. The Organizing Committee consisted ofE. D. Bergmann, J. Jortner, J. J. Lagowski, G. Lepoutre, U. Schindewolf and M. J. Sienko, reflecting the international and interdisciplinary aspects of the field.