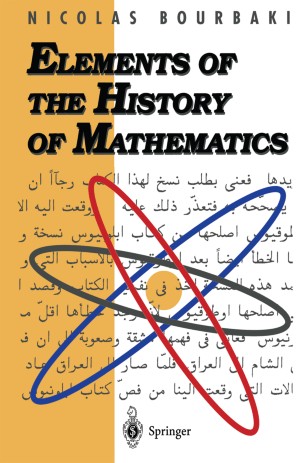 Elements of the History of Mathematics

This work gathers together, without substantial modification, the major­ ity of the historical Notes which have appeared to date in my Elements de M atMmatique. Only the flow has been made independent of the Elements to which these Notes were attached; they are therefore, in principle, accessible to every reader who possesses a sound classical mathematical background, of undergraduate standard. Of course, the separate studies which make up this volume could not in any way pretend to sketch, even in a summary manner, a complete and con­ nected history of the development of Mathematics up to our day. Entire parts of classical mathematics such as differential Geometry, algebraic Geometry, the Calculus of variations, are only mentioned in passing; others, such as the theory of analytic functions, that of differential equations or partial differ­ ential equations, are hardly touched on; all the more do these gaps become more numerous and more important as the modern era is reached. It goes without saying that this is not a case of intentional omission; it is simply due to the fact that the corresponding chapters of the Elements have not yet been published. Finally the reader will find in these Notes practically no bibliographic or anecdotal information about the mathematicians in question; what has been attempted above all, for each theory, is to bring out as clearly as possible what were the guiding ideas, and how these ideas developed and reacted the ones on the others.