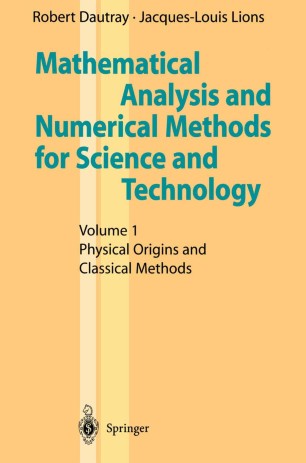 Mathematical Analysis and Numerical Methods for Science and Technology

In the first years of the 1970's Robert Dautray engaged in conversations with Jacques Yvon, High-Commissioner of Atomic energy, of the necessity of publish­ ing mathematical works of the highest level to put at the disposal of the scientific community a synthesis of the modern methods of calculating physical phe­ nomena. It is necessary to get away from the habit of treating mathematical concepts as elegant abstract entities little used in practice. We must develop a technique, but without falling into an impoverishing utilitarianism. The competence of the Commissariat a I'Energie Atomique in this matter can provide a support of exceptional value for such an enterprise. The work which I have the pleasure to present realises the synthesis ofmathemat­ ical methods, seen from the angle of their applications, and of use in designing computer programs. It should be seen as complete as possible for the present moment, with the present degree of development of each of the subjects. It is this specific approach which creates the richness of this work, at the same time a considerable achievement and a harbinger of the future. The encounter to which it gives rise among the originators of mathematical thought, the users of these concepts and computer scientists will be fruitful for the solution of the great problems which remain to be treated, should they arise from the mathematical structure itself (for example from non-linearities) or from the architecture of computers, such as parallel computers.