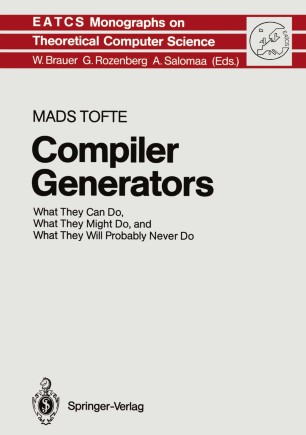 What They Can Do, What They Might Do, and What They Will Probably Never Do

The OrIgIn of this monograph is a course entitled "Semantics­ directed Compiler Generation" which Professor Neil D. Jones gave in 1982 at Copenhagen University, where I was a student at the time. In this course, he described a compiler generator, called CERES, which he was developing. I immediately felt attracted to the unusual combination of mathematical reasoning about com­ pilers and the small intricate building blocks that made up the running system. As I came to understand the system I discovered that within the existing mathematical framework one could express compiler generation as a special case of compilation; this led to a specification of a compiler generator which was bootstrapped on itself resulting in a machine-generated compiler generator. The purpose of this monograph is to describe the CERES system we produced in 1983-84 and compare it with other systems, includ­ ing more recent ones. Also, it is as relevant today as it was then to discuss the role of compiler generators as an aid in the design and implementation of programming languages; this I do in Chap. 5. This monograph is a strongly revised version of the cando scient.