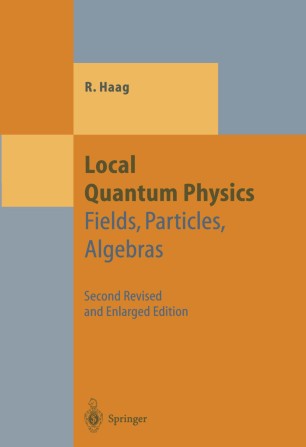 This textbook gives a comprehensive account of local quantum physics, understood as the synthesis of quantum theory with the principle of locality. Centered on the algebraic approach it describes the physical concepts, the mathematical structures, and their consequences. These include the emergence of the particle picture, general collision theory covering the cases of massless particles and infraparticles, and the analysis of possible charge structures and exchange symmetries, including braid group statistics. Thermal states of an unbounded medium and local equilibrium are discussed in detail. The author, one of the most original researchers in this field, takes care both to describe the ideas and to give a critical assessment of future perspectives.
The new edition contains numerous improvements and a new chapter concerning formalism and interpretation of quantum theory.
"Under his influence the synthesis of relativity, quantum theory and the theory of operator algebras now called algebraic quantum field theory has proven itself to be extremely flexible and powerful. /.../ This book is by no means the summa of the field of algebraic quantum field theory" Stephen J. Summers, Gainesville, FL, Mathematical Reviews, Issue 94d, USA 1994 "Indeed, both the expert in the field and the novice will enjoy Haag's insightful exposition of the basic physics behind the abstract mathematics, and his unique way of making complicated mathematical theorems plausible without getting bogged down in tedious details. /.../ This book is bound to occupy a place on a par with other classics in the mathematical physics literature." Meinhard E. Mayer, University of California, Irvine, Physics Today, May 1993