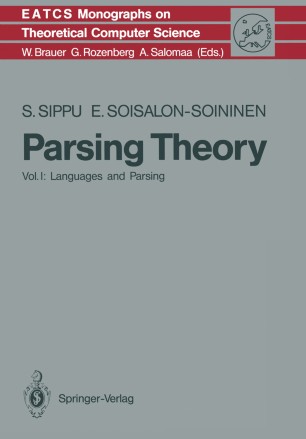 Volume I Languages and Parsing

The theory of parsing is an important application area of the theory of formal languages and automata. The evolution of modem high-level programming languages created a need for a general and theoretically dean methodology for writing compilers for these languages. It was perceived that the compilation process had to be "syntax-directed", that is, the functioning of a programming language compiler had to be defined completely by the underlying formal syntax of the language. A program text to be compiled is "parsed" according to the syntax of the language, and the object code for the program is generated according to the semantics attached to the parsed syntactic entities. Context-free grammars were soon found to be the most convenient formalism for describing the syntax of programming languages, and accordingly methods for parsing context-free languages were devel­ oped. Practical considerations led to the definition of various kinds of restricted context-free grammars that are parsable by means of efficient deterministic linear-time algorithms.