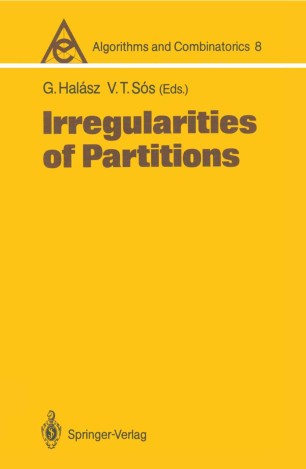 Part of the Algorithms and Combinatorics 8 book series (AC, volume 8)

The problem of uniform distribution of sequences initiated by Hardy, Little­ wood and Weyl in the 1910's has now become an important part of number theory. This is also true, in relation to combinatorics, of what is called Ramsey­ theory, a theory of about the same age going back to Schur. Both concern the distribution of sequences of elements in certain collection of subsets. But it was not known until quite recently that the two are closely interweaving bear­ ing fruits for both. At the same time other fields of mathematics, such as ergodic theory, geometry, information theory, algorithm theory etc. have also joined in. (See the survey articles: V. T. S6s: Irregularities of partitions, Lec­ ture Notes Series 82, London Math. Soc. , Surveys in Combinatorics, 1983, or J. Beck: Irregularities of distributions and combinatorics, Lecture Notes Series 103, London Math. Soc. , Surveys in Combinatorics, 1985. ) The meeting held at Fertod, Hungary from the 7th to 11th of July, 1986 was to emphasize this development by bringing together a few people working on different aspects of this circle of problems. Although combinatorics formed the biggest contingent (see papers 2, 3, 6, 7, 13) some number theoretic and analytic aspects (see papers 4, 10, 11, 14) generalization of both (5, 8, 9, 12) as well as irregularities of distribution in the geometric theory of numbers (1), the most important instrument in bringing about the above combination of ideas are also represented.