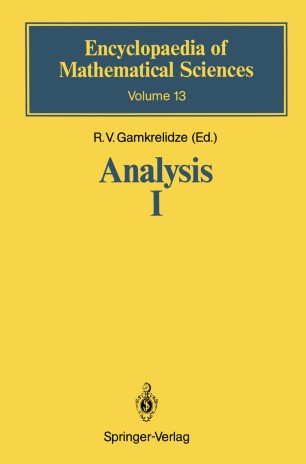 Infinite series, and their analogues-integral representations, became funda­mental tools in mathematical analysis, starting in the second half of the seven­teenth century. They have provided the means for introducing into analysis all o( the so-called transcendental functions, including those which are now called elementary (the logarithm, exponential and trigonometric functions). With their help the solutions of many differential equations, both ordinary and partial, have been found. In fact the whole development of mathematical analysis from Newton up to the end of the nineteenth century was in the closest way connected with the development of the apparatus of series and integral representations. Moreover, many abstract divisions of mathematics (for example, functional analysis) arose and were developed in order to study series. In the development of the theory of series two basic directions can be singled out. One is the justification of operations with infmite series, the other is the creation of techniques for using series in the solution of mathematical and applied problems. Both directions have developed in parallel Initially progress in the first direction was significantly smaller, but, in the end, progress in the second direction has always turned out to be of greater difficulty.