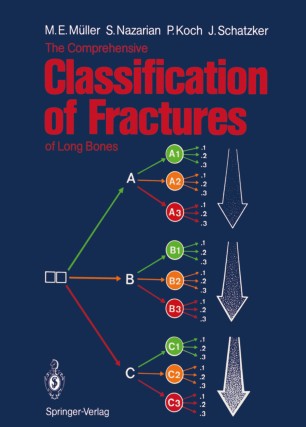 The Comprehensive Classification of Fractures of Long Bones

The history of the origin and development of the new Classification of Fractures was described in the preface to the French edition. The history of the acceptance of this new concept dates back to 1986, when the Swiss Association for the Study of the Problems of Internal Fixation (AO) accepted the new Classification of Fractures. In the same year, the Trustees of the AO/ASIF Foundation, at their annual meeting in Montreux, adopted the new AO Classification as the basis for fracture classification to be used in the planned third edition of the AO/ASIF Manual. In August 1987, the French edition of "The Comprehensive Classification of Fractures of Long Bones" made its first appearance, coincident with the Congress of the International Society of Orthopaedic Surgery (SICOn in Munich. This precipitated a great deal of interest in the subject. This interest persisted, so that in February of 1988 the President of SICOT, Sir Dennis Paterson, formed a "Presidential Commission for Documentation and Evaluation" with Maurice E. Muller as Chairman.